Everyone’s attention at the 34th convocation grand finale held on Friday 13th December 2019 at the Sports Pavilion, North Campus of the institution was caught by Abdulganeey Mubarak Olayiwola of the department of Chemistry, Faculty of Science, as he was presented as the overall best student of the institution for 2017/2018 academic session. 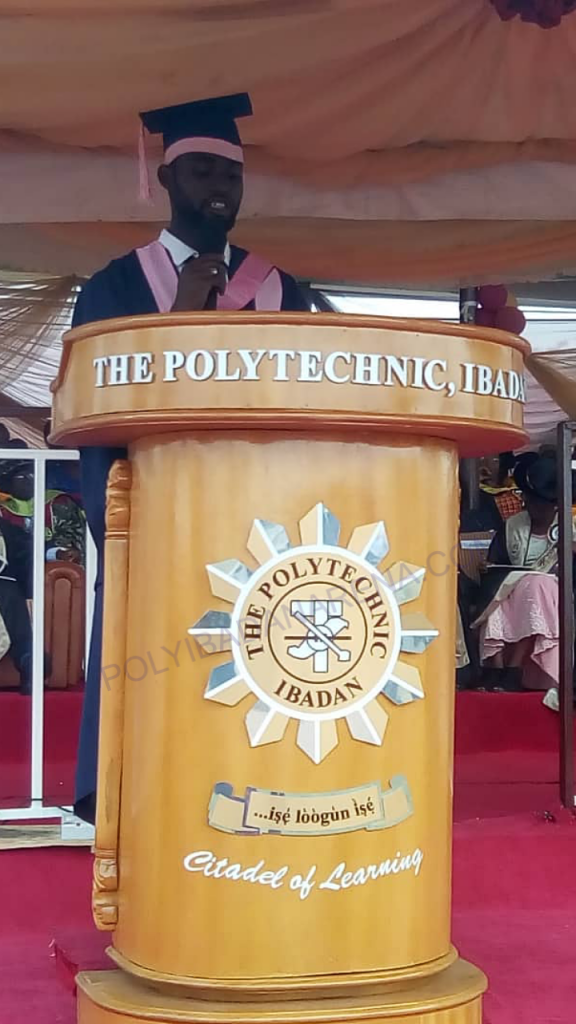 “The polytechnic Ibadan is not just a school you attend and you expect not to be taught. No, you will be taught very well and you also need to build yourself. Most students find it difficult to build themselves, they just believe let me read my note. If I read my note I will pass”, Abdulganeey said in his speech.

The Rector, Prof. Kazeem Adebiyi, “The Polytechnic, Ibadan has trained you not only to make use of your brains but more importantly your hands. You should be job creators not job seekers. The graduation exercise is to crown the efforts of the graduates after a successful and hard-working academic exercise”.

He also emphasized lot of achievements the school has attained in her bid to promote education in the state as well as Nigeria at large. “Education demands sacrifices on the part of parents, the society and various donor agencies, as we live in a world where appreciation of knowledge is never an on ending one. The diploma you are receiving today will make you proud, there is no inferiority in you except that which you allowed”, He said.

The convocation ceremony which was preceded with a lecture held on Thursday, 12th December 2019 at the Assembly Hall, North campus by Professor Ayobami Ojebode (Department of Communication and Language Arts, University of Ibadan) titled: The dream, challenges, and reality of contemporary Nigeria for fresh graduates.

Hence, students were groomed on the prospects of their dream, challenges and reality as well as bridging the gap between the dream and reality. “To survive this reality of contemporary Nigeria, the graduates must be well informed. What do you do with your phones? Do you know of Wattpad or all you know is WhatsApp? When graduates fully prepare and develop themselves, the labour market would become a true market”, He said.

The Governor, who was represented by Prof. Daud Shangodoyin, the state Commissioner for Education, said that his administration appreciated quality academic culture and would not do anything to hinder its development.

“My administration is determined to salvage the education sector from its malaises. The problem facing education is multifaceted, but we are prepared, more than ever before, to confront the problem and make the state a model educational state to be emulated by others in terms of quality personnel engaged in academic activities at all levels.

“The budget recently presented to the state House of Assembly has given education the highest allocation of 22 percent, hence we hope that Oyo State will bounce back as the leading educational state and fountain of knowledge setting the pace for others.

The Governor noted that the major challenge in tertiary institutions in the country was electricity, saying that it has hindered learning and researches. He however, said it is imperative to put an end to the dichotomy between university and polytechnic education in Nigeria as was done in the United Kingdom.

Professor Dahud Kehinde Shangodoyin, who spoke in his capacity as the commissioner for education, assured that the government would do it’s positive best to take the institution to an enviable position.

“This institution needs repositioning not only to maintain a fourth position among its counterparts, but to be the foremost polytechnic at the national and international standard, taking the lead role in technological innovation”, he said.

The commissioner applauded to the peaceful working relationship with the unions and the staff, expressing the optimisms such that it would translate into quality level of performance in promoting the status of the institution. He therefore charged the graduands of the positive strategies they should medle into so that they’ll be able to survive the aftermath of graduation process.