On the 5th day of August 2019, the management and students of the Department of Public Administration, converged at PAD Hall to celebrate with Alhaji Adekunle Busari on his retirement. The ceremony was organized to appreciate, and also eulogize the efforts of Alhaji Busari towards the development of the department.

The acting Deputy Rector who is also the Dean, Faculty of Business and Communication Studies, Mr. Femi Ipadeola in his opening remarks explained the impact and leadership skills portrayed by the retiree describing him as a man of efficiency, intelligence, and discipline. Adding that he is a predictable personality who was always ready to uplift his subordinates and colleagues at all cost.

While speaking at the retirement ceremony, the Head of Department, Public Administration, Barrister O.J Diekola explained that the retirement of Alhaji Busari is a big fish coming out of the shore which is the first of its kind in the department.

Stating further, “Here is a man who means well for you, if you deserve it; you’ll get it. A very good family man who’s conscious of home which the legacy laid cannot be sweep under the carpets.”

The excited retiree, Alhaji Adekunle Busari in his speech appreciated God and his colleagues for their kind gestures till the end of his administrative services in the institution. 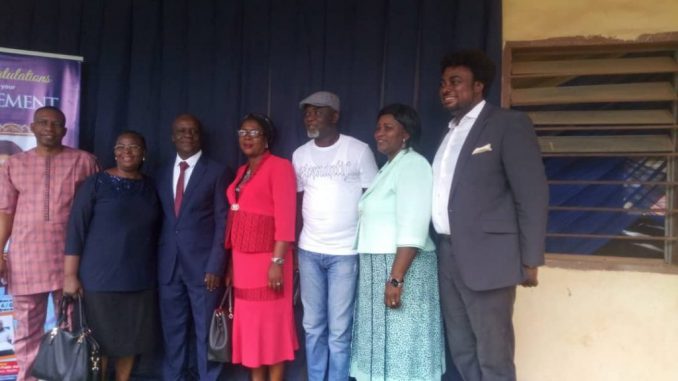 According to him, everyone has diverse meanings and perceptions about him but his achievements are won based on merit without any form of mediocrity and favouritism which everyone should emulate.

Mrs. Olayinka Oke stated in her paper presentation titled “Administrative Leadership; Kunle Busari’s Experience”, that leadership is not about the present position one attains but the positive impacts one set. Adding that Alhaji Busari is a transformational leader who is zealous to do the right thing at the right time and in the right way without side attractions or preferential treatment.

Other invited speakers at the event include Dr. Badmus Moshood of the Department of Economics, AAUA and Dr. Akanji Olajide of the Department of Political Science, University of Ibadan eulogized the functionality and hardworking gesture of the retiree towards promoting academic excellence, such that normalcy will be emulated socially, economically and academically in every individual’s life, institution and nation at large.

In a chat with the NAPADS Press, other lecturers, retirees and students explained that BABA, as he is fondly called, is someone one will need his academic support, fatherly advice as well as his loyalty and experience even though he is retired.

The event which had in attendance Deans of Faculties, Head of Departments as well as both Academics and Non-academic members of staff, families and friends also featured presentation of award to the retiree and music performances from the Students of Music Technology Department and Public Administration Music Group.